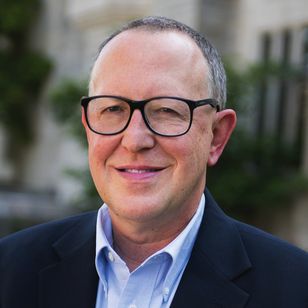 Professor Hoffmann is an award-winning scholar and law teacher. He holds the Harry Pratter Professorship, and is a past recipient of the Law School Gavel Award and the university-wide Outstanding Young Faculty Award. In addition to courses in criminal law and procedure and seminars on death penalty law and the psychology of criminal law, Hoffmann teaches seminars on the law and society of Japan and Asia.

Before joining the Indiana Law faculty in 1986, Hoffmann clerked for the Hon. Phyllis A. Kravitch of the U.S. Court of Appeals for the Eleventh Circuit, and for the Hon. William H. Rehnquist of the U.S. Supreme Court.

A nationally recognized authority on the death penalty, he has also written extensively about criminal procedure and habeas corpus law. Hoffmann is co-author of a groundbreaking book on habeas corpus,

Habeas for the 21st Century: Uses, Abuses and the Future of the Great Writ (University of Chicago Press, 2011) (with Nancy J. King). He is also a co-author of one of the leading casebooks in criminal procedure law, Comprehensive Criminal Procedure (Aspen 2nd ed. 2005) (with Allen, Livingston, and Stuntz). He served as Co-Chair and Reporter for the Massachusetts Governor's Council on Capital Punishment, and has spearheaded successful death penalty reform efforts in Illinois and Indiana. Professor Hoffmann is also on the faculty of the National Judicial College, where he teaches about death penalty law.